A Photographic Modality What modality do you use to view the world around you?

Aah how the world continues to surprise me!

A walk around UQ campus on Wednesday not only showed me other areas of brush turkey activity: 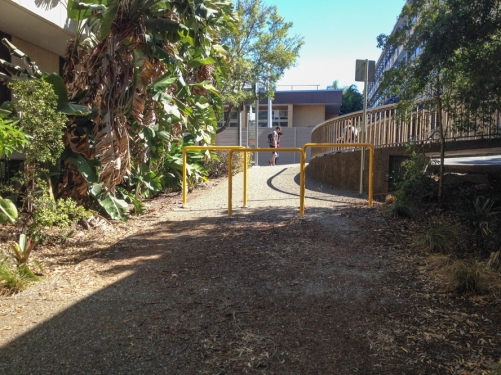 but also  updated me on how quickly the world of Turkey-tecture can change:

A newly clean-swept pathway between the Brush turkey nest on the Great Court (left) and the old Radon Lab in Alumni Court (right).

However, off-campus a truly heartening sign that man is on the Brush turkey’s side, is the sighting of several mounds of fresh bark chips that have recently been deposited by the city council in Acacia Park (off Carmody Road adjacent to UQ campus):

Perhaps this is “bait” ploy by UQ administration to lure “recidivist” Turkey-tects off the campus?

Imagine walking along the well-kept concrete perimeter path to the Great Court lawn centered at the distinctive sandstone University of Queensland, when quite unexpectedly it is is crossed by a trail of bark chips strewn across it. My curiosity piqued, I stop and slowly turn around to look at what I had walked over. Other people continue walking and do not appear to be taking any notice of this abstract smear of bark underfoot, as it is cold and at the end of a long university day and people are walking with determined strides to get home.

It took me a few moments to visually collate and decode what I was viewing: bark chips and leaf litter strewn in a line across the path next to the Parnell Building, a small pile of bark debris pushed up against a path abutment, a clean garden bed with exposed black soil, and… a large mounded heap of bark and leaf detritus lying in a garden bed within the confines of the Great Court. And then it clicked as to what this unusual sight represented! Of course, it was the “work site” of an  Australian Brush-turkey (Alectura lathami)!

Belonging to the megapode (or “big foot”) family of birds they are known as Scrub Turkey, Brush-turkey and Wild Turkey (and sometimes misnamed “Bush-turkey”). The male industriously rakes together loose vegetative detritus (leaves, bark) and soil to build mounds of 1- 2m in diameter and up to 1m high so that eggs from a number of females can be laid and incubated in them.

So how does the Brush turkey go about the practice of mound building? Is he an engineer, designer, builder, or landscape architect? Does he use subcontractors? Does he have the qualifications and authorisations/permits to construct  a ‘mounded structure’  within a university precinct, does it meet current building codes and standards? As a structure what architectural theory of built space did our brush turkey follow? Was he biased by a quasi-tectonic outlook (I think the loose, unstructured and chaotic pile of bark debris wouldn’t stand up to close scrutiny), were the inlaid eggs the foundation of a nascent stereotomic building approach; (if no mortar or egg-based footings were in place I don’t think they would suffice)?

So keeping things real in the realm of ‘Turkey-tecture’ and putting architectural conundrums and construction codes aside, what impressed me as I traced the trail of bark and leafy debris from the mound to its origins was the energy and sheer determination exhibited by  the single male brush turkey who had raked bark detritus from its university garden bed source… over 50m distance away!  No small job for a small bird with big feet! Not only did it rake bark detritus over lawns, but through the alumni court shelter between the Parnell and Goddard buildings: 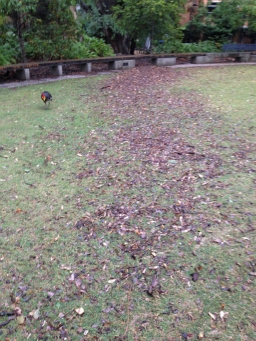 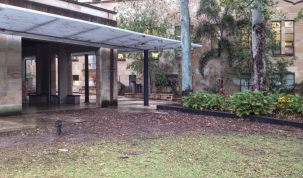 It also scraped back every skerrick of leaf and bark detritus across garden beds and constructed a rampart up to the level of the Great Court: 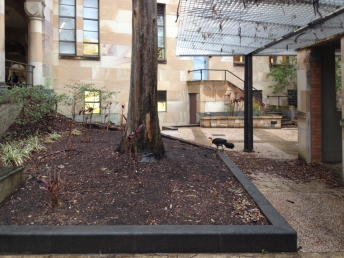 Back at home base all that the resident Brush turkey had to do was to conduct vigilant maintenance of the mound incubator by either adding or subtracting (making it a quantity surveyor too) local litter and debris (including the odd scrap of blue plastic bag) to maintain the requisite temperature of the mound nursery to maximise egg-hatching success.

However, just like the urbanisation that is happening in Brisbane and beyond, “Turkey-tecturisation” is also making its presence felt further afield on campus with a broad swathe of bark detritus being swept across the path between the Steele (Geology Dept.) Building and the Commonwealth Bank where another nesting mound is being constructed. 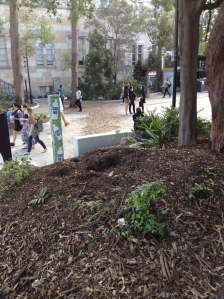 I wonder if the spread of Turkey-tecture will be limited after a human slips and falls on the bark trails, or if the freshly-hatched chicks stage a sit-in on one of the lecture theatres? Perhaps then some sort of building ordinance will come into effect restricting mound-building to Turkey-tecture zones that are segregated from human pedestrian traffic… or perhaps a compromise could be reached where pedestrian cross-overs or ramps, or Brush turkey underpasses could be constructed, allowing free segregated passage for both forms of bipedal transport (the soled and the clawed)? That would make for a for more interesting walk around campus wouldn’t it?

Celebrating midcentury architecture and design in Queensland and around the world

Art Deco in the Australian bush